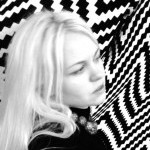 Zlata Jaanimägi has exhibited a total of 15 artworks at 13 exhibitions organized by artnetco.eu all over Europe.

Zlata Jaanimägi was born in 1981 in Estonia, Tallinn. She lives and works in Stockholm, Sweden and is a member of the Swedish Artist’s Union (Svenska Konstnärsförbundet). Artistic since her early childhood, Zlata was attending art school for 7 years, thereafter taking part in preparatory arts program in Estonian Academy of Arts in Tallinn.

Later, she was studying multimedia, film and theatre directing in St Petersburg, Russia, wherefrom she graduated in 2004 with a degree in Film and Theater Directing - Master of Arts Degree.

Zlata Jaanimägi has been trainee on TV, in Cartoons and Games studios, as well has been working for a few years as an Art Director, graphic designer for advertising agency (specialized in outdoor and indoor advertising).

Before moving to Stockholm in 2013, she spent close to 6 years in Helsinki first freelancing and later dedicating to her art full-time.

‘’In all of my paintings I express myself completely, and the process leaves me feeling absolutely light, free and open to something new and beautiful. I like to experiment with colors, shapes and mix different art styles. The unusual aspect of my work is that some of my paintings can form different images when combined together and some of them are three-dimensional. My paintings have positiveenergy, which makesthem easy to relate to, but at the same time each one is based around a central, often complex idea that springs from my own inner feelings, my state of mind and my fantasies, dreams and illusions. Although the brushstrokes are dynamic, with a strong rhythm and contrast of colours, they are never aggressive, instead carrying peace, calm and love of life with them like an aura. There is no art without fantasy. Well, I am an artist and painting is my creativity’’.